Finnish writer Bo Carpelan (1926-2011) gained unparalleled recognition amongst Finland-Swedish readers at home and others worldwide for his work as a poet and novelist. Yet despite a good deal of his literary output having been translated into English, surprisingly little critical commentary exists for the English reader. This study seeks to fill that gap, discovering as it does the dialogic possibilities inherent in Carpelan’s work. Eight scholars separately embarked on a common challenge: to use the critical methodology of Mikhail Bakhtin to read Carpelan’s novel Urwind, which won the Finlandia Prize in 1993. The resulting discussions take on topics from art and music to time, to the borders between genres, as well as humanistic geography and the thematic of mid-life, many times stretching past Urwind to touch on other of Carpelan’s texts.

Bo Carpelan’s richly textured novel, Urwind, and Mikhail Bakhtin’s subtle theories of discourse are brought together in this stimulating and sophisticated collection of essays. The contributors approach Carpelan’s work using all the ideas Bakhtin has placed at their disposal – dialogism, chronotope, carnival, polyphony, the unfinishedness of novels – but in an inquiring and open, rather than merely deferential, spirit.  The result is one of the most interesting and subtle discussions of Bakhtin’s relationship to modernist prose we have seen, a book that sheds light on Bakhtin’s work as well Carpelan’s. 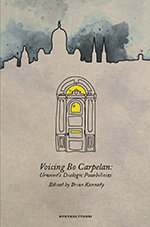