There are relatively few studies concerning the verbal syntax of Middle French although the language underwent significant modifications during this period. Until the 17th century, there existed no strict grammatical norm. Consequently, modal use could vary in similar syntactic contexts of different discourses based on the speaker´s attitude towards the matter. I hypothesize that modal change is not linear from Latin to Modern French, but that, for example, the re-latinization of French could have an influence on modal useas well.

For these reasons, I will analyse the exceptional use of moods (subjunctive, indicative, conditional) in syntagmata of the same kind in main and subordinate clauses, aiming to explain deviation from the general tendency of the era. This study is a description of modal use in an unexplored corpus of Middle French, not a theorization of the subjunctive. It is not even pertinent to search for a common denominator for the subjunctive, because there are cases in which its normative use seems to have no special semantic value, such as in Je suis heureux qu'il ait fait cela. The subjunctive verb form does not reflect doubt here.

The corpus contains 16,165 occurrences of subjunctive, indicative and conditional forms. In 1.6 % of the cases, there is morphological variation of verbal forms. In 13.0 % of the cases, the speaker´s perception of the subject is emphasized: semantic variation arises then from the speaker´s doubt, hesitation, ironic attitude, irresolution, indifference to the message. An opinion he/she considers false or illusory generates the subjunctive verb form in a subordinate clause. In the 16th century, there is still a common tendency to express facts in the indicative instead of the subjunctive (required by the norm of the 17th century). However, a necessary condition for the use of the indicativeis not only the existence of facts but also the knowledge of these facts on the speaker´s part.

In Old and Middle French, the subjunctive expresses precisely doubt, unlike in Modern French. When other means of expression (adverbs, modal verbs, certain complements) fulfil the same function, the subjunctive disappears. On the other hand, the most important reason for the diminution of subjunctive use is, without doubt, the general tendency of spoken language to simplify expression. In conclusion, modal use in Middle French can be considered to be more semantically motivated than it is in Modern French. 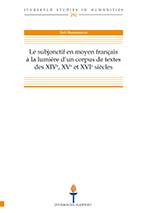