These wishful words have not lost their meaning during the centuries, although they historically represent the birth of the modern world and reflect the thoughts of enlightenment already in the 18 th century. They were realized in the French revolution and the tricolor flag.

The Nordic countries have taken seriously the whispers of the enlightenment. They have transferred the words into the field of education. In the name of enlightenment Nordic countries were among the first to develop a wide adult education system in order to cultivate their adult population. They believed, that it is education which gives the people the liberty, equality and fraternity. The very core of the idea of the Nordic welfare state is educational equality as the spearhead to the social equality of the whole nation.

Some answers to these questions are suggested in this book. The answers are presented by the most eminent as well as by junior researchers within the field in Nordic adult education research. Have a seat and read. 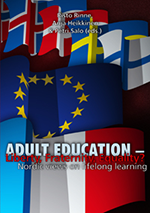