Adolescent facing the educational politics of the 21st century

During the last decennium, widespread changes towards neo-liberal educational and social policies have taken place all over the post-industrial world. The old slogans of solidarity and equality are being replaced by the ideas of parental and personal choice, competition, efficiency and managerialism.

What is happening with the young generations? To what extent have the youth adopted the new educational ideals? Are there still differences between the countries with different lengths of experience of marketisation in the spheres of education and social policy?

These questions are approached in this book within the framework of welfare state models, examining the opinions of youth from Finland, Sweden, Spain, Portugal and Australia. The book is composed of five case reports and a comparative section. 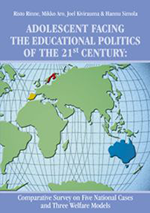